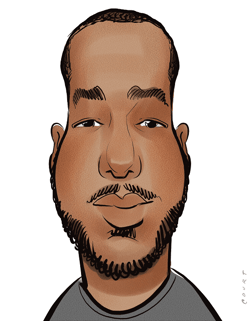 Born in Washington D.C., Yaw went to Montgomery College in Germantown, Maryland, before transferring to Towson University near Baltimore, Maryland.

During college, he learned about Cetrom through his sister-in-law. She worked as a tech at the help desk, and he interned in her position from 6 p.m. to midnight “in case anyone called in.” He spent most of his nighttime internship writing college papers and studying.

Yaw graduated with a bachelor’s degree in information technology because he always read articles and followed the industry.

“Technology has always grown,” he said in a phone interview. “It’s always going to be around. It’s a solid career.”

And a great career choice it was.

He got a job at Cetrom as a systems engineer, which meant he now worked during the day. This schedule shift exposed him to more clients, other employees, and on-the-job training, which was “easier than reading about it or watching videos.”

The 8-year Cetrom veteran is currently a senior system engineer, in which he “implements new technologies in our environment.”

“I like [that] ability,” he said. “We’re not really locked down to doing things a certain way. They give us a shot and let us test [new programs] out,” especially if it benefits everyone.

“It’s definitely been a roller coaster,” he said. “It’s been a great ride. We’ve been doing a lot more, bringing more people on. It’s crazy to see how small we were seven years ago to where we are now. It’s been a lot of fun.”

His professional hopes include continued success for Cetrom.

“I...hope we continue to get bigger and grow,” he said. Steps toward this growth include keeping existing clients and getting more bright-eyed engineers.

As for his advice to those future engineers?

“[Don’t] stay specific to one piece of technology or infrastructure,” he said. “Learn a little bit of everything to make yourself more diverse in technology and different systems.”

His job isn’t all work and no play, though. Yaw took the time to answer a few fun questions about his favorite superhero, his ideal dinner with a historical figure, and his go-to items for survival on a deserted island:

If you could be any character in fiction, who would you be?

“Spider-Man. I think he’s the coolest superhero ever.”

If someone wrote a biography about you, what would the title be?

If you could have dinner with anyone from history, who would it be and why?

“Anyone from history? That’s a good one. I’d...say [Martin Luther King Jr.]. I’d...want to sit there and ask him questions about why he did what he did, how he was brave enough to do it, a big why he decided to take the man on when a lot of people were afraid to.”

What is your favorite movie?

“Remember The Titans. Denzel [Washington] is one of my favorite actors. He makes the movie interesting to me. I watch it every time I see it on TV.”

If you could travel anywhere in the world, where would you go?

“Galapagos Islands. I really like blue water, and every time I see that place, it looks awesome. You see the marine life. I’d like to go scuba diving there.”

What three items would you bring to a deserted island?

“A sleeping bag, a fire starter, and mosquito net. I hate bugs.”

Moving Your CPA Firm to Cloud Computing in 2021

Why Moving to the Cloud is Necessary in 2021 and Beyond This may be a moot point for many accounting firms who have already moved to the cloud..
Read More

Cetrom Support fixed all of my problems, their engineers are very professional, courteous, friendly and very efficient. If all customer service out there was like this, it would be a better world...

One of the things we appreciate wholeheartedly about working with Cetrom is how great the people in the service area are and the high-level of responsiveness we have received. I’ve been very pleased..

Cetrom’s services and support really stood out against the other cloud vendors. We thought their Citrix delivery platform would have a higher level of adoption because our employees would have the..

Our accounting services users working in the field have greatly benefited from our migration to the cloud. They’re now able to be much more efficient while working in a client’s office because they..

The decision to migrate to the cloud was one of the best business decisions Rub & Brillhart has made. It required an investment, but we have determined that our year two IT costs will be reduced by..

Our migration process with Cetrom was very smooth and we had an excellent experience with their support during the demo process. We have 24/7 monitoring on our onsite equipment and they have the..

We are extremely happy with the service and support we receive from Cetrom. Our staff is more efficient overall in our day-to-day activities and we don’t have any downtime. It’s a good feeling..

Cetrom is an extremely cost-effective option for IT services. Not only do we receive significantly improved customer service, but we were also able to add a new VoIP system, better internet service,..

We use two programs that often posed a challenge for our previous IT providers. Cetrom handled the situation professionally, coordinated with the software vendors, did all the backend testing, and..

After interviewing and reviewing the proposals from various IT providers, it was really a night and day comparison about price, service, and performance—Cetrom was just outshining the others on every..

I just want to drop you a line and let you know how pleased we are with our move to Cetrom. Your people knocked it out of the park for us and are doing a great job getting us up and working. On our..

Cetrom’s Cloud Computing offers a high-quality, reliable and secure alternative to traditional IT management and provides immediate access to all my IT resources whether I’m in the office, at home or..

Moving Your CPA Firm to Cloud Computing in 2021

Why Moving to the Cloud is Necessary in 2021 and Beyond This may be a moot point for many accounting firms who have already moved to the cloud..
Read More

Cetrom Support fixed all of my problems, their engineers are very professional, courteous, friendly and very efficient. If all customer service out there was like...

See all
Is Cetrom Your Cloud Services Solution?
Take Our Quiz